The figure above illustrates the functionality of the dScope's Reference Sync circuits. The primary function of the Reference Sync is to provide a synchronization source for the digital audio outputs, and so it is controlled through the Digital Outputs dialogue box shown below. 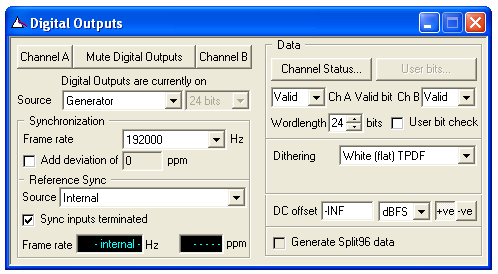 The digital audio outputs are synchronized to an ultra-stable PLL (phase-locked loop), which generates all required output timing signals for the Digital Outputs, as well as the AES11 and WCK Ref Sync outputs which appear on the rear of the dScope. The PLL may be locked to either the internal TCXO (temperature compensated crystal oscillator) or to a variety of external references. The PLL has good jitter rejection capabilities down to very low frequencies, so that any clock jitter present on an external reference is not transferred to the Digital Output. The TCXO is accurate to within ±1ppm and, as such, is more accurate than most calibration equipment. It should generally not require recalibration, but any recalibration of the TCXO should be to an off-air reference standard. The PLL is able to fix the rate of the Digital Outputs with arbitrary frequency relationship to the selected reference. This allows, for example, Digital Outputs to run at 48kHz from a 44.1kHz reference, or to exhibit a designated frequency offset in either direction between 1 and 1500ppm.

The XLR Reference Sync input has a switchable 110R termination, and can only carry a AES11 (DARS) reference.

The BNC Reference Sync input has a switchable 75R termination, and can carry WCK (Wordclock), Video (PAL, SECAM, NTSC 30 or 29.97 fps), AES3–id or, using a supplied RCA (phono) adapter, S/PDIF. When a video reference is used, the relationship between the video frame rate of the reference and the audio frame rate of the Digital Output can be complex, depending on the video standard applied and the specified sample rate.