The script uses the dScope Series III's FFT trace and scripting capabilities, together with a "bin centres" waveform to measure the frequency response of a system relative to a set reference. The idea is that you measure the frequency response of an equaliser with the filters out of circuit (or set to their flat position) and set this as the reference position. Measuring relative to this reference gives a flat line at 0dBr if the frequency response remains the same. You can then change the position of any of the EQ controls and see the effect that it has on the frequency response in real time with high resolution. The script finds the peak bin (positive or negative) within a search range of frequencies. It then measures its gain and finds the points 3dB down from this in order to display the half power bandwidth and calculate the Q of the filter. The interface is shown below. 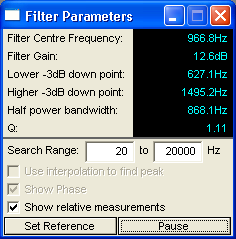 In addition to the numerical data, it also plots the magnitude and phase response as shown below. 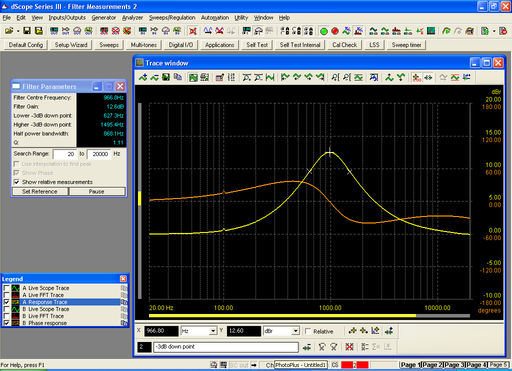 Screen shot filter measurements script in in use

The download consists of a zip file containing a single dScope script and configuration. Full documentation is included in the zip as a PDF document.