These are all real applications that Prism Sound test equipment has been used for and there are many many more. Some of them can be done out of the box. Some require some automation from within the dScope application. Because the dScope Series III audio analyzer is a soft instrument, it can be used to get those hard-to-get results. Automation can be used in a wide variety of ways to simplify complex processes and to make the difficult possible. The user defined FFT detector can be programmed to return a result that can then be used as any other FFT detector result: it can be swept, limit checked, used in regulation routines, etc. etc.

PS...
If you really did want to see the probability distribution of the amplitude of digital audio sample points in a radio broadcast advert and compare them with the same broadcast during the news and while playing music, here's one we prepared earlier: 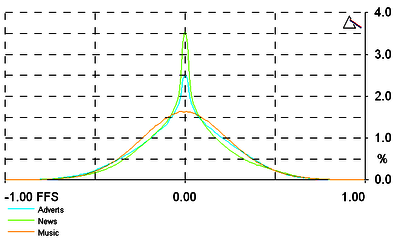