San Francisco, US: Anyone who has ever had their vehicle stolen will understand exactly how radio broadcast engineer Jay Rose felt when his truck was taken from a hotel car park in Las Vegas. But what made his experience so much worse is that not only did he lose his vehicle, he also lost a collection of tools and audio test equipment that had taken him more than 30 years to accumulate. 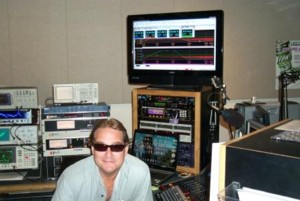 "It was absolutely gut-wrenching," Jay Rose explains. "I was in Vegas working on a project for KVEG when the truck went. I was in total chaos and I can honestly say it was one of the worst days of my life."

But it seems that even the blackest cloud has a silver lining because the loss all his equipment gave San Francisco-based Rose the opportunity to re-evaluate what he needed, particularly in terms of audio test equipment.

"I was effectively starting again, so I decided to use the opportunity to look at what was new on the market." he says. "After much research I kept running into the name Prism Sound. I made a few calls and found myself talking to the company's US representative Doug Ordon. When he heard what had happened, he jumped on a plane and brought me a Prism Sound dScope Series III audio analyzer to demo. We spent the whole day together and I drilled him on every possible function of the unit. I was so impressed that I immediately bought the unit and wouldn't let Doug take it back with him. I spent the next two days familiarizing myself with it and writing my own test configurations. Losing everything I'd worked so hard to build up was dreadful, but buying the dScope Series III went a long way towards making things better."

As a second-generation broadcaster, Jay Rose was immersed in the industry from a very young age. His father, Dr. Don Rose was a major Radio Air talent who dominated several markets during his 34 year career, including San Francisco where he hosted the morning show at KFRC for many years. Rose junior was fascinated with engineering and had the opportunity to observe first-hand all aspects of the radio broadcast industry. By the time he was 13 years old he had built his own broadcast studio and started a sound company. By 18, his sound and lighting company has assets of over $250,000 and was supplying services to over 1,000 events around the US. During his career, Jay Rose has worked for numerous radio stations including KMEL-FM SF, KIOI-FM SF, KYLD-FM SF, KKSF-FM SF, KGO-TV/DTV SF and KKBT-FM LA. His tenure at KMEL culminated in the position of Director of Engineering for the San Francisco and Los Angeles markets and he has also worked for major corporations such as Century, Evergreen, AM/FM, Clear Channel, Disney, Infinite, Pacific Coast, Kemp, C/Net and General Electric.

In 1999, Rose founded his present company, Jay Rose Broadcast Engineering, which offers engineering services to radio station clients across the US.

He says: "The projects we tackle vary from station to station and could be anything from checking studio to transmitter links, installing new equipment or simply tweaking the existing infrastructure to make the station sound better. However, in every case I am always asked to adjust the station's audio processing because I have a reputation for being the hired gun that is brought in to improve sound quality. In order for any station to sound bigger than life everything must be good under the hood. My years of experience, particularly in live sound, have given me a solid reference that allows me to hear most problems immediately. But I also need to verify and prove what I am hearing - and that's where the Prism Sound dScope Series III really comes into its own."

Rose says the dScope Series III is now his most prized piece of audio test equipment because it is so true. It also offers many more features as standard than his previous test equipment, which allows him to work faster and with more accuracy.

"It is perfect for both bench and location work because it is so small, portable and easy to use," he explains. "On the bench I can run two large 42" LCD monitors and really expand my view, while on the road I don't have to compromise because the dScope Series III is really compact and fits easily into my truck.

Rose usually builds his own test configurations using up to 40 FFTs at the same time and in his preferred units of measurement. This is where the dual monitors really pay off, serving up a conventional FFT on one monitor and the dScope instrument's multiple FFT Detectors on the other, thus giving Rose an unmatched view of the signal path under test.

"The Prism Sound dScope Series III has a wealth of useful features, including A/D and D/A testing, analysis of digital word, data and carrier jitter, storage of tests and the ability to run over 40 tests simultaneously. With dScope, I have been able to isolate a problem and, within seconds, make it appear on the unit so that my broadcast clients can immediately see what is going wrong. It is very easy to read, even by someone who isn't highly technical. In fact many of my clients now have their own dScope software, so we can exchange test results by email."

In today's world, radio broadcasters expect their engineers to be experts in every field. However, with so many new technologies to contend with, proving what your ears are hearing isn't always easy.

"Even though more and more of the audio we deal with is digital, our ears are still basically analogue devices," Rose explains. "This means we can hear what many test sets miss. In my job it's really important to get at the truth and be able to prove it to the customer's satisfaction. This is why I really appreciate the capabilities of the dScope Series III. It is an incredibly powerful tool and, thanks to an ongoing process of software upgrades, I'm constantly finding new ways to use it. But, despite all its portability and functionality, what I like best is the fact that it never lies."