Cambridge, UK: Lewes-based Application Solutions (Safety and Security) Limited, a specialist in developing Public Address and Voice Alarm Systems for the rail and airport industries, is utilising four dScope Series III audio analyzers for the R&D and production line testing of its PA/VA range of products. 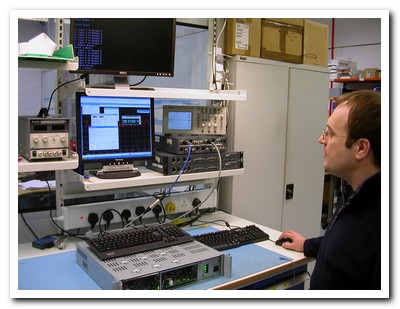 
"For me what sets the instrument apart is how simply the automated tests can be created and scaled up to multichannel testing by the use of dScope Switchers," comments the company's Production Engineer Terry Donoghue. "Also, we use dScope Series III script serial port functions for programming on-board devices. We've found that many programs have a command line interface that can be driven directly by dScope. This means we can often avoid a separate programming operation during production."

ASL's Keith Ovenden with another dScope


Having previously worked with Prism Sound's Engineering Director, Ian Dennis, Donoghue knew exactly what he was getting when he ordered the instrument. "I was already aware of the comprehensive feature set offered by dScope Series III and the cost benefits compared to the competition," he says. "I also had first-hand experience of the no compromise design ethos fostered by Ian Dennis, so had no hesitation recommending Prism Sound products to ASL."

ASL is using the instruments in two main ways. Firstly, design engineers use it to test new products, with DSP and software engineers using dScope Series III extensively for evaluating EQ and other functions, and analogue engineers using it for optimising the audio performance of their designs. Then there's production line testing.

This has helped the company push the technology to new heights. At London's St Pancras station, for example, it has recently supplied the ground breaking new 'iVENCS' IP based Station Control System, which is a fully integrated safety and security control system with a user interface based on a 3D model of the entire station.

"When I started working at ASL, audio production line testing was mostly done using a competitor's system with manual instructions for setting audio parameters. I could immediately see the time saving benefits of replacing that system with dScope Series III and using automated test scripts," concludes Donoghue. "All new audio designs use dScope for R&D and production line testing and some older tests have now been converted, too."

Simon Woollard, Applications Engineer for Prism Sound, adds: "This application is a great example of how a unified audio test and measurement platform can really streamline the process of taking a product all the way from the design phase through to the production-line testing. When all engineers are using the same platform, it can really pay off in terms of allowing test configurations, sequences and results to be shared quickly and easily. I am pleased to see that Terry and his engineering colleagues are really maximising the horsepower of their dScope III systems to exert downward pressure on their product development cycles and to maximise their production line throughput."