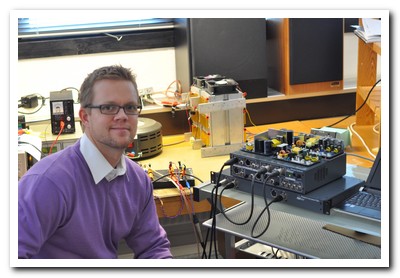 
Anaview is using its dScope Series III for testing distortion, bandwidth, noise and multi-tone intermodulation products in the development of switch mode amplifiers. It's an exacting task.

"Perceived sound quality is a very complex topic," comments Anaview's CEO Patrik Bostrom. "An amplifier that performs well on the typically presented graphs does not necessarily sound good. In order to find a way to methodically design a good sounding amplifier one has to have a measurement system where the input signal and the performed measurements can be fully controlled by the user. For example, the multi-tone modulation is more important than THD at one frequency. The ability afforded by dScope to design our own test signals also gives us the opportunity to analyze problems that only occur during dynamic passages in music."

Prism Sound's dScope Series III instrument includes precision analogue and highly-optimised digital outputs and inputs. Precise and automatic gain-ranging allows high resolution measurements over a massive range, from a few micro-volts to more than 150 volts RMS, and from less than 1 Hz to over 90kHz. Its interface processor uses dedicated DSP to provide a wide range of real time measurements, while its software uses the host PC for almost unlimited number crunching and analysis options such as Fast Fourier Transforms, unique 'FFT Detectors', swept sine and multi-tone testing. Designed to be highly programmable, the dScope Series III can be automated from a wide range of third-party software using Active X controls, or internally using VBScript.

Bostrom adds that dScope Series III is proving ideal for Anaview's needs and was purchased for a variety of reasons, not least its flexible interface, resolution, measurement capabilities and competitive pricing.

"dScope Series III has a wide range of functions and possibilities, but it is also very intuitive and easy to use," he says. "We have managed to get more complex functions going without too much hassle. It also seems to be very powerful and flexible. The smaller size compared to the competitors is a bonus too."

Simon Woollard, Applications Engineer for Prism Sound, comments: "Most audio engineers appreciate that 'classical' measurements such as THD+N are not nearly revealing enough to determine how a device will really sound. dScope Series III includes a number of unique tools that enable engineers to really understand the performance of their device, well beyond basic measures such as THD+N. One of the most widely used of these is our 'Smart FFTs', a series of software instruments which enable the operator to see parameters such as noise products, distortion components, crosstalk and intermodulation artefacts, simultaneously and in real time. The ability to define custom twin-tones and multi-tones is also extremely useful in terms of understanding the non-linearities of the system under test."

Woollard adds: "These kind of analysis features are relatively new in the field of audio test and measurement, and have come about by virtue of a paradigm shift that Prism Sound has pioneered - we have shifted audio analysis from the analogue domain to the digital domain, and in doing so, have led the way in developing far more revealing and meaningful audio analysis methods for engineers like Patrik."