A script that can be used for keeping track of a signal over a period of time, monitoring and plotting the average, minimum and maximum for the RMS value on channels A and B and the CTA readings on channels A and B. The download is a zip containing the script, configuration and documentation.

The script works by repeatedly getting measurements from dScope Readings. A Reading in this instance (with a capital R) is a separate panel in the dScope application containing a single reading from one of the dScope instruments. In this case the script uses the Continuous-Time Analyzer (CTA) and the Signal Analyzer (SA). The Readings themselves are set to keep track of minimum and maximum values of the parameter they are measuring. In this way it is possible to keep track of the peak sample values, the maximum or minimum THD+N or RMS amplitude to name but a few. The script takes these data, and processes them. The current value from each Reading is used to generate a running average (by default set to 20 points, but configurable in the script). The minimum and maximum values are read from the Reading and then reset. This means that the max and min values on the dScope Readings only show the short term minimum and maximum measured since the last time they were reset by the script (typically every 300ms). The script, meanwhile, keeps track of the long term minima and maxima. The short term minima and maxima are then plotted on the trace window along with the current values. A screen shot of the script user interface is shown below: 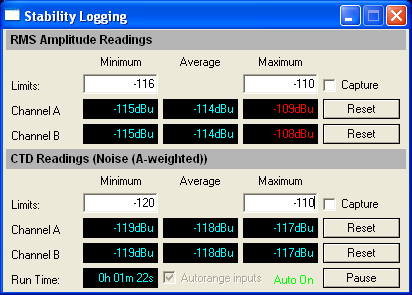 Capturing events
If the "capture" checkbox is checked, the script can capture the waveform in order to be able to view the scope trace of the signal at the point the limits were exceeded. This is intended to be used to capture drop-outs or spikes in the waveform that are otherwise difficult to view. It uses the minimum and maximum limits as trigger points for this. If the short term minimum level is less than the minimum limit or the short term maximum level is greater than the maximum limit, the script will turn on the FFT detector trigger. There are two capture checkboxes, one for the RMS level and one for the CTD readings. The script is set up by default with 48kHz sampling and a 32k point FFT buffer giving 680ms of sample data. This can be changed in the configuration. The FFT trigger point is also set to the end of the buffer so that the trace window will display the last 680ms of data before it was triggered. This should be long enough to contain any disturbance that caused the limits to be exceeded, even though it is now in the past.

The download is a zip file containing the script, a configuration and full documentation.