This is an automation script to enable the dScope to detect a multi-tone in an FM radio broadcast or other transmission medium and make measurements from it.

The script makes use of the dScope Series III FFT detectors to reliably detect the presence of the multi-tone and avoid false triggering from program material. It does this by looking for the presence of each of the audio tones in the program material and only triggers when the required number of tones are present above the background level. At this point, it samples the audio and makes measurements. Measurements are held in memory by default, but can optionally also be logged to a spreadsheet. FFT traces can also be saved to file.

Running the script loads a configuration which then monitors the analogue audio inputs of the dScope for the presence of the required multi-tone. The user interface is shown below. 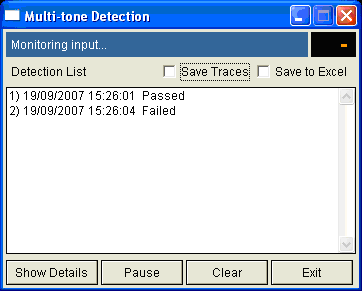 The script is intended to be used on the receiving end of a transmission path where it will continuously monitor the incoming audio for the presence of the multi-tone. To do this, the analogue audio outputs from the device at the receiving end of the path are connected to the analogue inputs of the dScope and the script is run. It is very unlikely that the script will be triggered by anything but the multi-tone as it effectively uses the FFT of the multi-tone as a key to trigger the measurements.

Recording the multi-tone (The script is set up so that the generator is continuously outputting it) and re-playing it through the transmission path with the dScope running the script at the other end will enable testing the transmission path over very long distances with arbitrary delay times. The script will probably need about 2 seconds of the multi-tone in order to reliably capture and measure. This can be improved on by reducing the number of averages that the FFT measurement uses. The dScope can be left unattended to monitor the connection over which time it will keep track of every time the multi-tone was detected, make measurements and, optionally, save the results to a spreadsheet and keep copies of the FFT spectra of the detected multi-tones. The user interface maintains a list of the multi-tones detected (as seen above) and lists the pass/fail for each 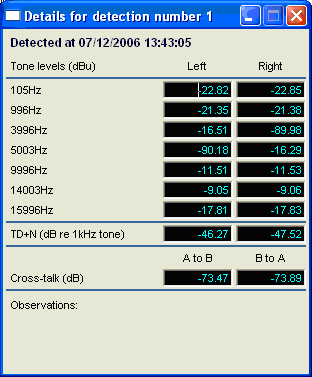 There is also the option to save the traces that are captured from the multi-tone. This can be a valuable analytical tool. These are saved as dScope .tra trace files which can be re-loaded into the dScope trace window for viewing.

An unusual feature of the dScope in this application is that the system can recover from a power failure provided the computer running the software doesn't lose power. In practice this means that if the software is loaded on a laptop with a battery or PC with UPS, the dScope software and script will be able to cope with the dScope hardware losing power. On the return of power to the dScope, it will continue logging after about 15 seconds.

The download is a zip file containing the script, a configuration, the multi-tone and filter files and full documentation. This script also includes an installer to copy the files to their correct locations within the dScope installation folders.