The ADC tests script aims to simplify some of the more complex tests that can be performed on devices with analogue inputs and digital output(s) (including Windows Sound cards being used for analogue input). It provides a user interface for selecting the different tests and running them, and provides a means of HTML report generation per test. These tests are generally different from and in addition to the AES17 tests supplied with the dScope. 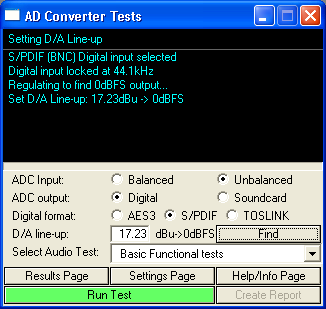 In addition to a range of conventional tests, specialized tests include: There is no separate help file, but each test contains a help page in the configuration to describe what that particular test is doing. This is accessible from the test interface using the "help/info" button.

To install the test, download the zip, unzip into an empty folder on the computer where dScope is installed and double click "Install Test Files.vbs" - this will copy the files to the correct locations within the dScope folder structure. From dScope you can then run the script "DAC Tests.dss" which will provide the user interface for the rest of the tests. This requires dScope Version 1.40f or later.

This application is largely complete, but there are some known issues. Most significant is that the reporting is incomplete and doesn't fully report the test conditions (eg, generator level, measurement bandwidth etc.). It also can fail to correctly set up D/A line-up if the device under test either can accommodate higher levels than the dScope can generate (+28dBu balanced or _22dBu unbalanced). It also does not check whether there is compression or distortion before 0dBFS is achieved when setting D/A line-up as per AES17 specifications. The supplied AES17 tests can determine the D/A line-up by checking for compression and/or distortion and the value entered manually if this is a problem.