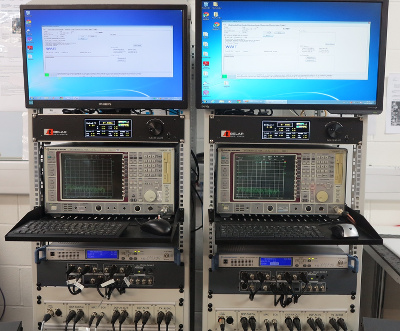 
Founded in 1997 by Scott Incz and Roger Howe, BW Broadcast designs and manufactures cutting edge but affordable broadcast equipment for FM, AM, HD Radio and Internet broadcasting. Known for its innovations in low-power FM transmission, RDS encoders and processors, BW Broadcast has undergone rapid growth in recent years thanks to the development of a successful range of DSP products including its V2 FM transmitters and the DSPX range of audio processors.

"To support our growth, we have recently taken on new staff in all departments," Scott Incz says. "We have also increased production to meet demand and this has resulted in an expansion of our product test facilities so that we can maintain high standards of quality control."

Incz says that Prism Sound's dScope Series III has played a pivotal role at BW Broadcast since the company acquired its first analyser 10 years ago.

"When we first decided to buy an audio analyser we looked at products from a couple of different companies and eventually chose Prism Sound's unit because it offered more functionality," he says. "Obviously, price was a consideration but I don't like the way that some companies sell you a basic product and then charge you more for plug-ins or additional features. In Prism Sound's case, the dScope Series III was a single box that did everything I needed it to do - and, of course, it was British-made, which was also a bonus."

Prism Sound's dScope Series III audio analyser is a powerful audio test solution that leads the way in advanced generation and analysis tools. Used in both R&D labs and production lines around the world, dScope Series III includes precision analogue and highly-optimised digital outputs and inputs. Precise and automatic gain-ranging allows high resolution measurements over a massive range, from a few micro-volts to more than 150 volts RMS, and from less than 1 Hz to over 90kHz. Its interface processor uses dedicated DSP to provide a wide range of real time measurements, while its software uses the host PC for almost unlimited number crunching and analysis options such as Fast Fourier Transforms, unique 'FFT Detectors', swept sine and multi-tone testing. Designed to be highly programmable, the dScope Series III can be automated from a wide range of third-party software using Active X controls, or internally using VBScript.

"Our new ATE systems incorporate various manufacturers' products including Prism Sound's dScope," Scott Incz says. "The system is incredibly fast and each system can test up to 40 products a day. It is also very easy for our staff to use - they just load up the unit being tested, select the model on the computer programme, enter the serial number and press go. 15 minutes later they have 200 test results, all of which are stored to a central database. This means that if a customer has a problem with one of our units - even if it is years later - we can access all the original data to help resolve the issue.

"Prior to installing our new ATE systems, we spent hours checking every piece of equipment and inevitably mistakes would occur. The two identical ATE systems have made a huge difference to our productivity and we are now looking to add a third one."

Scott Incz added that dScope Series III is a central piece of the jigsaw. "We couldn't operate our ATE without it," he says. "We use dScope to test every aspect of our products' audio performance, including measuring the performance of our DSP code. dScope allows us to carry out numerous audio-related tests and always gives accurate results. We particularly like the FFT multitone testing feature because it allows us to take multiple measurements at the same time, which really speeds up the testing process."

Although Prism Sound can offer computer scripts for production line testing, BW Broadcast decided to commission its own script for its ATE.

"We went the custom script route because we wanted our ATE to work with lots of different test products," he says. "It took over a year to develop our custom script and we soon discovered that the parameters were moving as the development went along. This is inevitable with computer scripting - the system you end up with is not necessarily the one you thought you would get. Since our ATE went live just over a year ago we've done a number of re-writes and tweaks, which have improved it even further."

BW Broadcast sells its products to radio broadcasters all over the world, as well as to movie theatres and sports stadiums. The company's Award-winning technology has recently been used in both the Soccer and Rugby world cups and the Olympics.

If you don't see a 'Send ..' button after filling the form, check if Java is enabled in your browser.