Back to Signal Analyzer 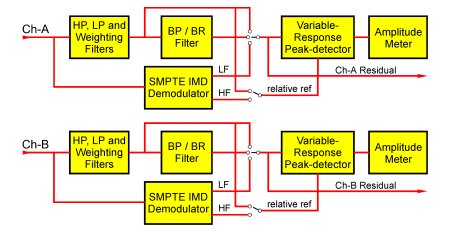 The CTA operates continuously on both Analyzer channels. On entering the CTA, the input signal is filtered according to the selection of high-pass, low-pass and Weighting filters. According to the selected function, the signal is then passed to the peak-detector either directly, or via a band pass or band reject filter, or via the SMPTE IMD demodulator.

The direct feed is used, for example, in basic amplitude measurements, the band reject mode for residual measurements such as THD+N, and the band pass mode for frequency selective measurements or for the exclusion of noise. The selectivity of the BP/BR filter can be selected from a number of different bandwidths (Q–factors). Its frequency can be set to track the detected Analyzer frequency, or the generator frequency, or it can be fixed at a preset frequency.

The SMPTE IMD demodulator is used for intermodulation distortion measurements, only in the SMPTE/DIN method where the stimulus is a combined low and high-frequency tone. It comprises a high-pass filter to remove the LF tone, followed by a demodulator circuit which shifts the IMD components around the HF tone to the base-band. The HF tone is then removed with a further high-pass filter, leaving only the demodulated IMD products.

The peak-detector can operate in RMS, peak or peak-to-peak modes, or in a special quasi-peak mode as defined by CCIR468. The latter mode is usually used for noise measurements in conjunction with a CCIR468 Weighting filter. A 'peak-sample' mode is also provided which measures the peak amplitude of the discrete audio samples rather than the interpolated peak amplitude measured in 'peak' mode. The peak detector can work in either absolute or relative mode. In relative mode, the Result is normally expressed relative to the pre-band-reject signal amplitude, as in the THD+N case. However, a number of other options for the relative-reference exist, for example the output of the Signal Generator (for gain measurements), or the Analyzer input of the opposite channel (for cross-talk measurements) or the SMPTE HF tone extraction for use in SMPTE IMD measurements.

The channel A and B residual signals are passed to the FFT Analyzer allowing, for example, display of distortion traces or FFTs of distortion residuals.